Sometimes a project comes along which makes you feel a little warmer on the inside.  And this was the case with a recent project we worked on for The Christie charity in . We have the utmost respect for The Christie and the work it does, and this job gave us the chance to try and help them raise more money to help with future research on cancer, a disease which we are told now touches around one in three members of the population of the .


Working closely with Music, The Christie’s branding agency, we were tasked to uncover insight that would inform a new campaign brand and ‘big idea’ for fundraising for The Christie.


The brief was broad, the questions were mainly open and the scope was wide.


The research that followed highlighted the passion many felt for the hospital itself but this was sometimes linked with a greater need for clarity and consistency when it came to how the brand was depicted and used in its publicity.


Research also suggested that if we could improve some of these issues and come up with a great ‘big idea’, then support would follow and response would be excellent.


Insights were many and various as we discovered that all three parts of our research sample had quite different perspectives on The Christie’s approach to fundraising today and how this might be improved for the future.


Once our work had been completed and presented to The Christie, it was the turn of the creative minds at Music to translate our ideas into a reality. Not that we saw our work as base metal but the team at Music does seem to have been able to turn it into gold.


Music created ‘The Big Do’. 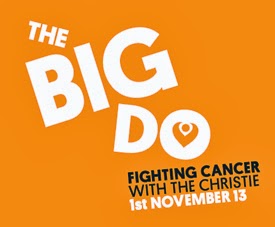 
The orange provides distinction and stand-out and incorporating The Christie ‘embrace’ within the new ‘The Big Do’ identity is yet another part of what we see as its genius.


So The Big Do has been launched and the big day is Friday 1st November.  We’re looking forward to supporting The Christie further, if not with more research, then certainly in our next company fundraising exploits.